The following article was published in Ultimate Experiences, January 2020.  A link to the PDF of that article can be found here:  Feature_JORDAN (4).   If you wish to book your adventure to Jordan, contact me or click here to find an expert travel advisor who can make it happen.  Happy travels to a small, welcoming country with so many world-class treasures to discover. 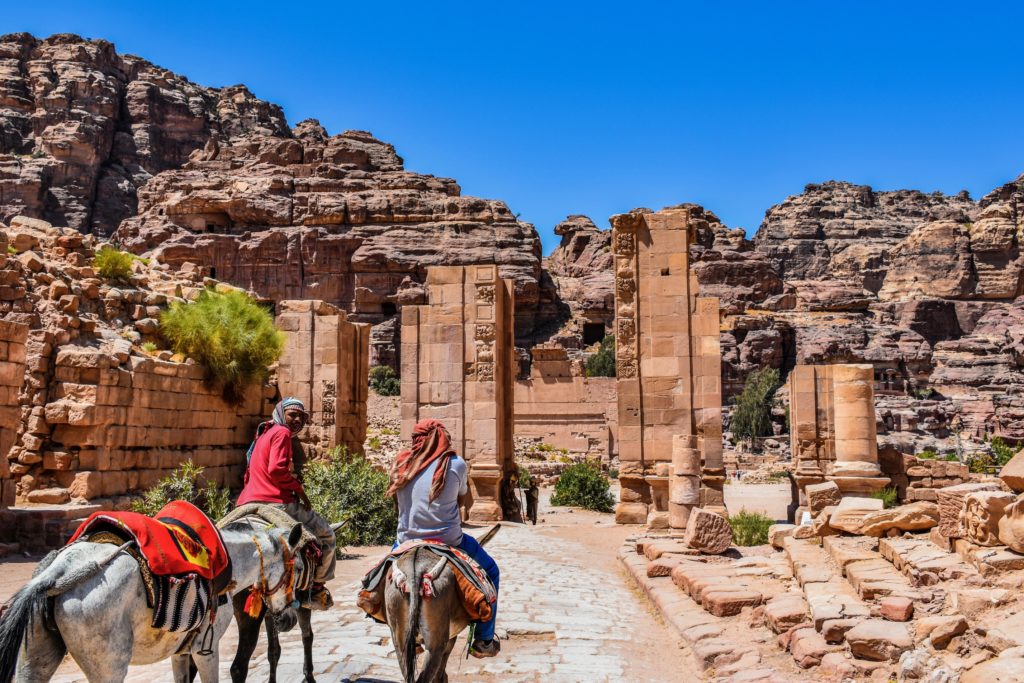 Along the Roman Road in Petra

In Jordan, the shadow of Petra looms large—from the famed filming of “Indiana Jones” to the magnificent Roman road— yet there are so many other world-class sites to discover in the country.  Indeed, a visit to Petra is a must, but book more than a three-day extension from a trip to Egypt or Israel so that you can take the time to explore Jordan in all its splendor. Jordan is my second home—I’ve visited at least 26 times. My most recent trip was for a wedding and a celebration of the Petra National Trust on whose board I am proud to serve. So in celebration of showing you “my” Jordan, let’s take a journey inspired by my ultimate itinerary. 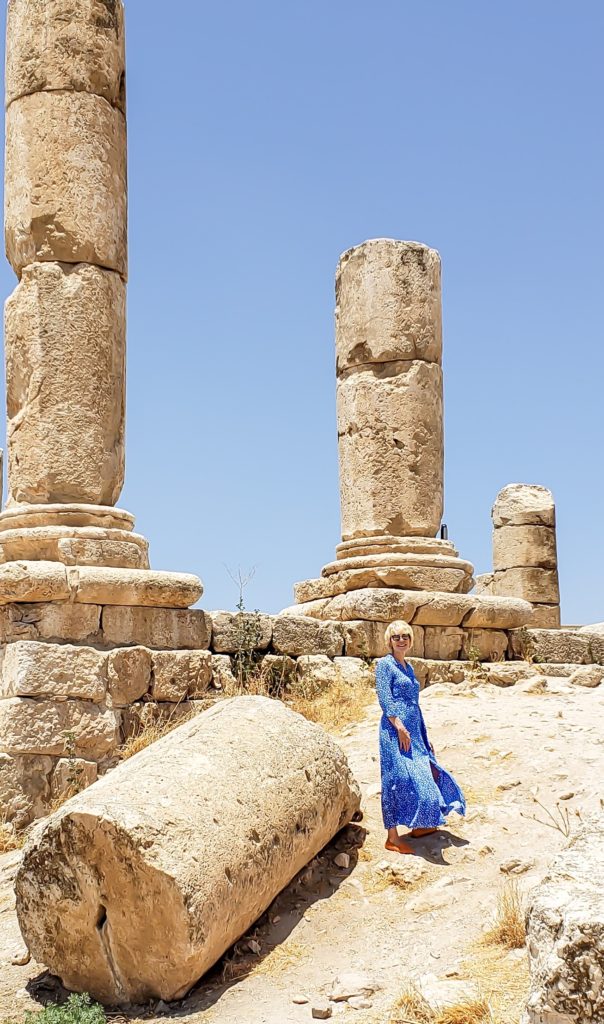 The author high above Amman, Jordan at the Citadel, the Roman Temple of Hercules.

We start in the north with a visit to Jerash. Just an hour’s drive from Jordan’s capital city of Amman, Jerash is an easy day trip and one of the finest Greco-Roman cities in the world. Perfectly preserved and never crowded, you can walk the ancient streets, imagining the former storefronts selling Roman wines while conjuring scents from the historic spice roads, yet don’t trip over the chariot marks, which are still present in the original marble paving stones. Ideally, Amman requires three full days during your visit: One day to recover from your flight (try Royal Jordanian, with beautiful Dreamliners that fly direct from New York City and Chicago) and two full days to experience all the sites. The Citadel and the Roman Theatre guard both the city and millennia of history. Here, Neolithic, Greek, Roman and Muslim culture meld together at the Citadel to tell the story of this part of the world. Hire a guide to explain the treasures but leave time to wander alone, experience the solitude, and be thankful that such a rare historic overview still exists. Modern Amman bustles with gold souks, markets, designer stores, and beautiful hotels. And don’t miss Daimeh, one of the finest restaurants in the Middle East. The food is superb and the restaurant is a highly successful initiative by Queen Rania’s Jordan River Foundation, supporting local communities and refugees. Be sure to peruse the superb local handicrafts in the shop. 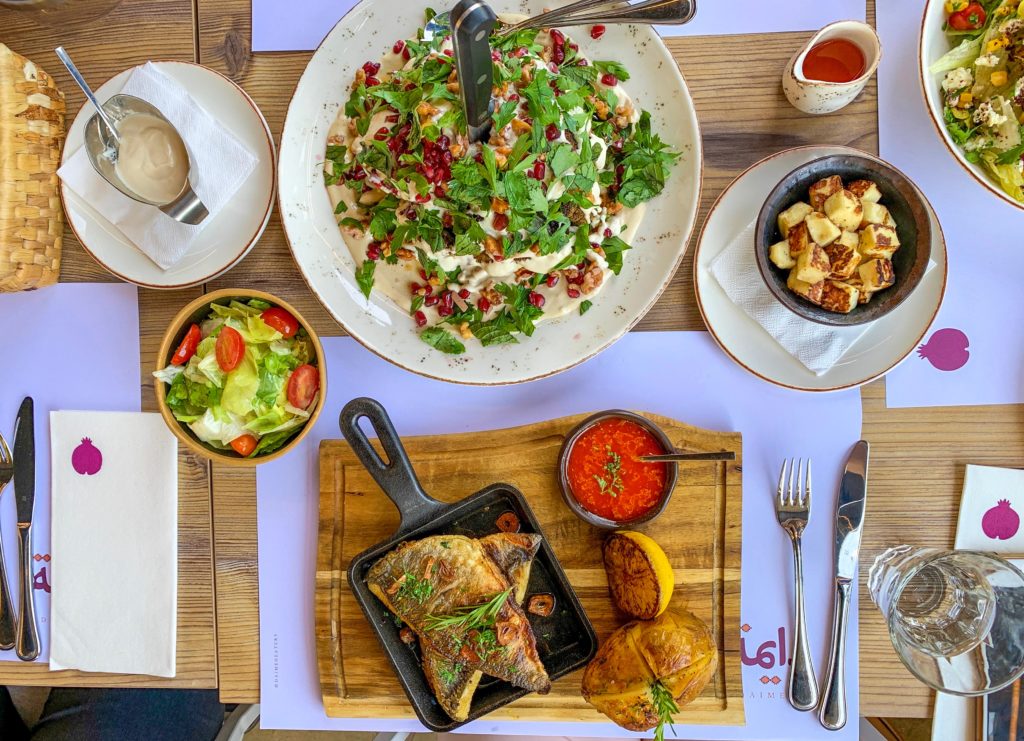 My delicious meal at Daimeh. Daimeh supports all communities across Jordan with locally sourced items and food prepared by the women of Al Karma Kitchen, a social enterprise sponsored by Queen Rania’s Jordan River Foundation.

The Jordan Trail or King’s Highway?

If you’re fit, ambitious, and have 36 days to spare, hike the newly inaugurated Jordan Trail, which traverses from the country’s northern reaches to its southern port. Unlike any other experience, here you can walk through history and explore small villages along the way while experiencing the famous hospitality of the Bedouin. Alternatively, drive south down the King’s Highway and take in an equally exciting expedition.

Bethany Beyond the Jordan

The new Bethany Beyond the Jordan site was discovered in just the past 10 years and has been named to the UNESCO World Heritage list. Archaeologists have discovered many early Christian baptismal pools located right on the River Jordan. Additionally, following the archaeological and biblical research, Pope John Paul II proclaimed this site as the baptismal site of Jesus. A rustic trail will lead you down to the River Jordan, and several Christian faiths have recently completed churches on this pilgrimage site. Many visitors bring an empty bottle to fill with water from the river—my children and grandchildren have used this water for their baptisms, and so too,  does the British Royal Family.

Next on your southward journey is Madaba. Famous for its mosaics, witness the most famous one— the Holy Land and Jerusalem. Created in the 6th century AD, it’s the oldest surviving original map of the region and was recently used at the International Court of Justice in The Hague to settle a present-day land dispute. 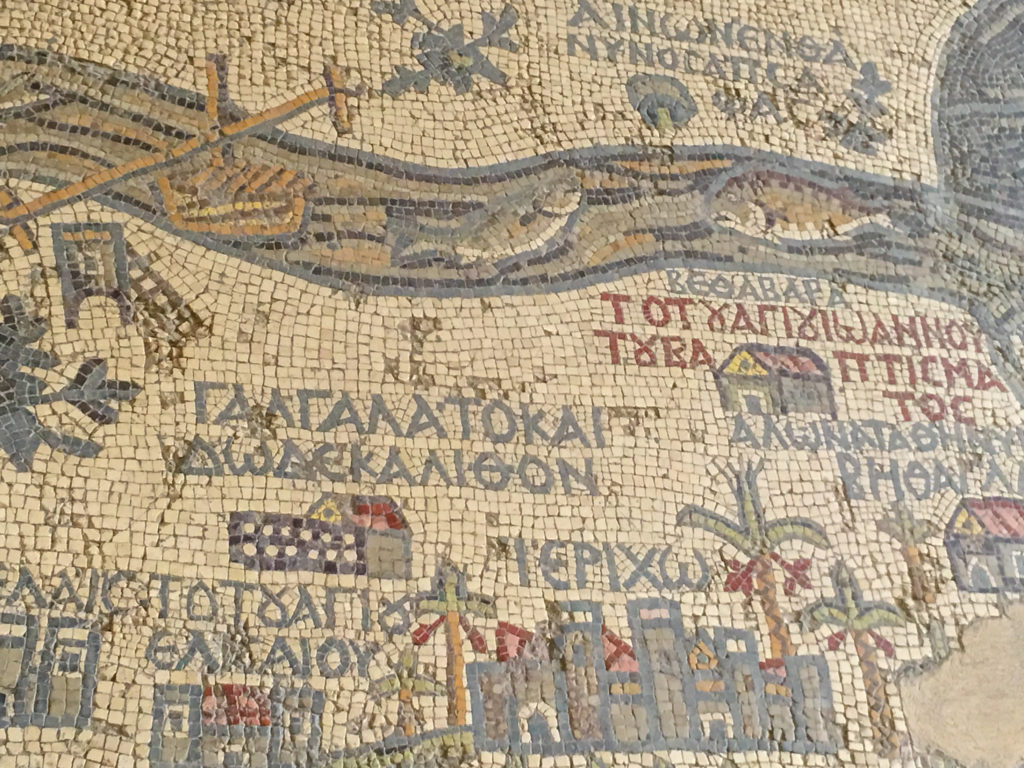 Nearby is Mount Nebo, the purported site where Moses viewed the Holy Land. On a clear day, you too can see Jericho and the golden Dome of the Rock in Jerusalem. A recently renovated church houses some of the finest Roman mosaics in the world, including a spotted camel clearly created by someone who had yet to see a real one—artistic license in ancient Rome! 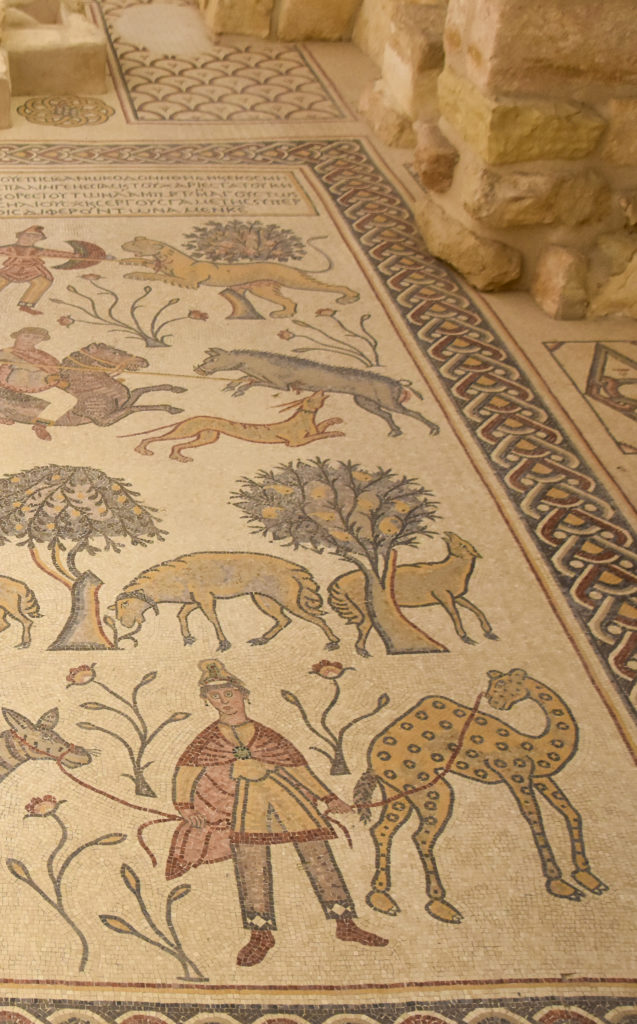 A 6th century CE Roman Mosaic at Mount Nebo.  Note the Roman artisan’s interpretation of a camel–he had never seen one but heard they had spots…….

Wadi Rum stretches south from Madaba, where you can experience the desert as Lawrence of Arabia did, albeit with a tad more comfort via luxury glamping. The landscape is otherworldly and has been the site for many films including the latest Star Wars, “ The Rise of Skywalker” and “The Martian” with Brad Pitt. After sleeping in the sand—even in the finest of tents—you’ll be primed for pampering. Fortunately, many exquisite Dead Sea resorts are nearby. Spend a day floating in the saline waters with well-known therapeutic effects and make sure to spend a spa morning or afternoon at the Kempinski Hotel Ishtar Dead Sea (the finest spa experience I’ve ever had). 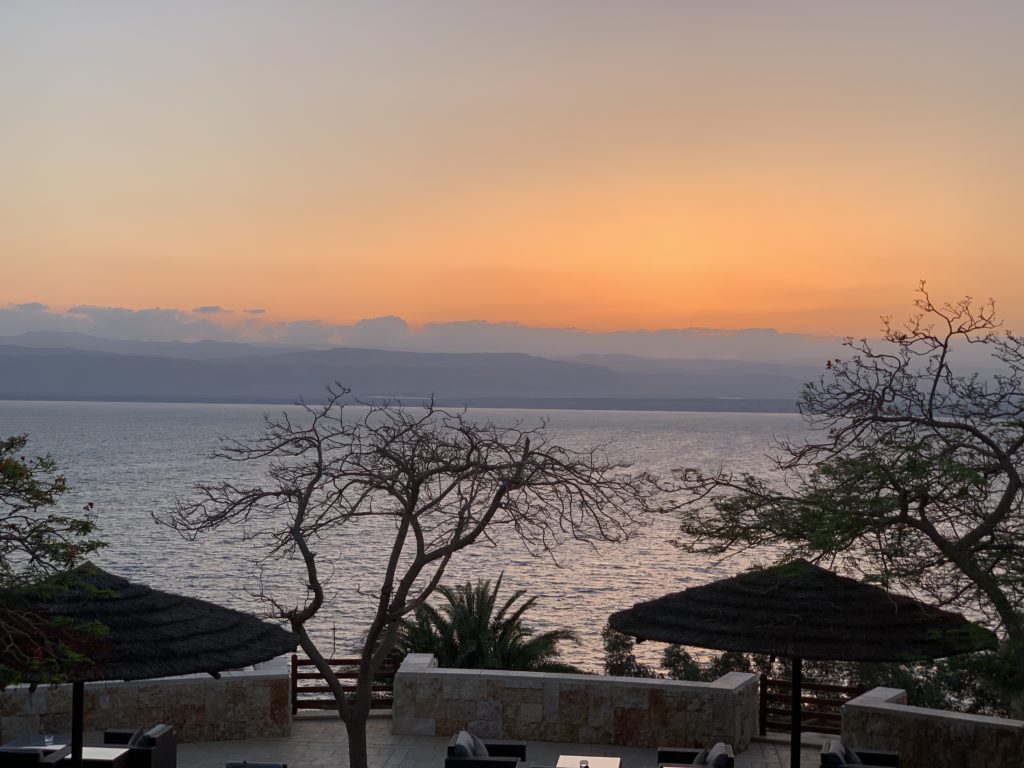 The Dead Sea at sunset looking to the coast of Israel from the Movenpick Dead Sea resort.

The Best of Petra 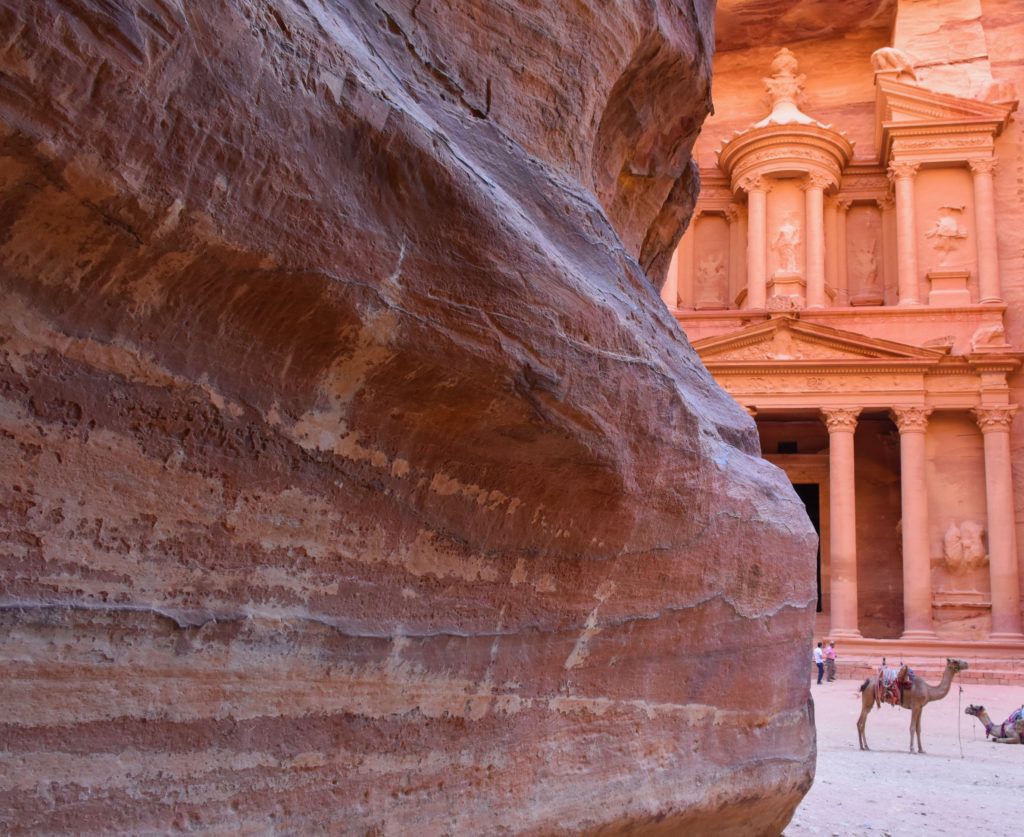 Your first glimpse of Petra will leave you speechless, just as it did for the Nabatean traders so many centuries ago.

Your next stop? Iconic Petra. Plan for two nights at the nearby Mövenpick Resort so you can visit the site at sunrise and then enjoy the wonderful Arabic mezze at the hotel. The Mövenpick is only steps from the entrance to the siq—the infamous entryway to the site. Take my advice: Walk the nearly mile-long path and don’t be tempted by the carriages or horses as walking is actually much easier on the body. It’s all downhill on the way in, which means uphill on the return, so save some energy after a day of exploring. The siq ends with a dramatic opening to the Treasury façade, made famous in iconic global photos. But take note: It is just a façade, with very small spaces behind. No large rooms with snakes as Harrison Ford found in “Indiana Jones,” but nonetheless impressive in its beauty and craftsmanship. Don’t stop here. My favorite area of Petra is located further inside the city, on the Roman road. Here, as you did in Jerash, you can walk down the street as others have for centuries, imagining the temples and shops that guarded the way while climbing the path to several ongoing archaeological digs. During my last visit, one of the digs was helmed by a team comprised entirely of women, a true rarity in this part of the world. As you explore, you’ll be faced with a decision—whether or not to climb the steep steps to the Byzantine Monastery. Your answer? Absolutely. Fuel up at one of the cafés; the Monastery and the view of the entire site is not to miss. 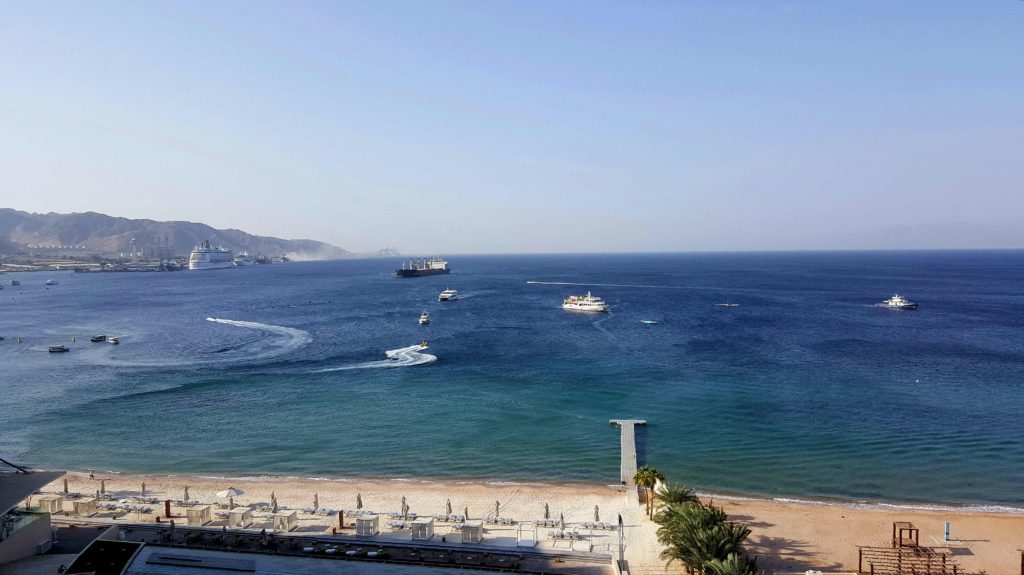 The busy port and resort city of Aqaba

Aqaba>The Center of the World

The King’s Highway ends in the port and beach resort city of Aqaba, arguably the center of the world. Did you know you can stand in Aqaba and see Saudi Arabia, Israel, and Egypt all at one time? Sit on the beach, watch the world go by as ships arrive in port, or dive into the beautiful waters—in mere minutes you could swim across the border to Israel, but you would be stopped by Israeli customs boats–guaranteed.

Your trip has now come full circle, from walking the marble streets of Jerash and the Citadel, strolling the sands of Wadi Rum and to standing where Moses viewed the “Promised Land” on Mount Nebo and marveling at the wonder of Petra. At last, you have visited Jordan—a small, welcoming country with outsized treasures that will leave you planning a return trip to spend more time discovering it all.